Green Beryl vs. Emerald: The Color

“Emerald has many special qualities, but colored stone professionals generally agree that emeralds are, most of all, about color. Emerald has been the standard for green among colored stones for thousands of years”, as the Gemological Institute of America (GIA) puts it. Indeed, the subject matter of “green beryl vs. emerald” is all about color. And about value, of course. Emeralds are praised for their green color, whereas green beryls lack this crucial component. Both, emerald and green beryl, are the variety of beryl. Emerald is the green to greenish blue variety of beryl. Green beryl, on the other hand, is light green or, as it is sometimes referred to, pale green beryl. Thus, all emeralds are green beryls in a sense, but not all green beryls are emeralds.

As GIA has put it: “Gem experts differ on the degree of green that makes one stone an emerald and another stone a less-expensive green beryl. Some people in the trade tend to give the name emerald to any green beryl colored by chromium. But to most gemologists, gemological laboratories, and colored stone dealers, it is more correct to call a stone green beryl when its color is “too light” for it to be classified as emerald.”

Green Beryl vs. Emerald: The Value

Emeralds not only have much more appealing color but are also very rare as compared to green beryl. The combination of these factors makes emeralds substantially more valuable than green beryl, of course. Actually, emeralds are among the most valuable gemstones in the world. It is always somewhat difficult to compare the value of two different types of gemstones, as the quality factor has to be taken into account at all times. Nevertheless, when we are speaking about green beryl vs emerald, the difference in the value is immense. It’s tens of times, at least.

Here we come to the very essence of this story. It’s the right time to recall GIA’s words that some people in the trade tend to give the name emerald to any green beryl colored by chromium. Even to the palest of them. They shouldn’t if they were honest sellers with appropriate professional ethical standards. The reality, however, is very different. Apparently, the temptation for high profits is too hard to resist for some people. That’s why potential buyers have to exercise due caution when buying emeralds or emerald jewelry. Below are some very instructive examples of how dishonest sellers are selling jewelry with green beryls claiming it is emerald jewelry. 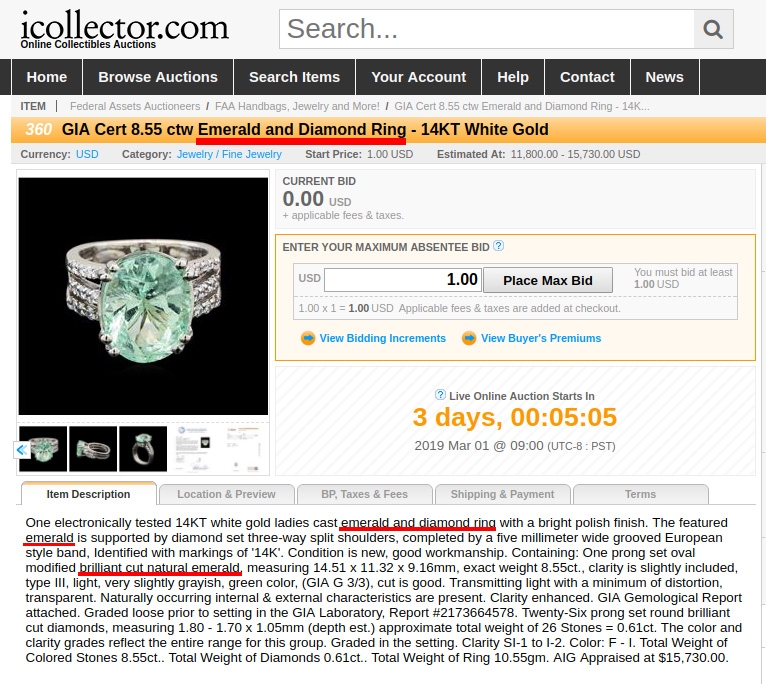 Figure 1: A Ring with green beryl being sold as emerald jewelry. Icollector.com

Here the seller repeatedly claims it’s a GIA certified emerald and diamond ring. It’s all over the place. It’s in the title and the item’s description. Its value is estimated at $11 800 – 15 730. So, everything seems crystal clear – it’s got to be an emerald and diamond ring. We get to the next image, the AIG’s certificate, and it repeats what has been stated in the item’s description (Figure 2). 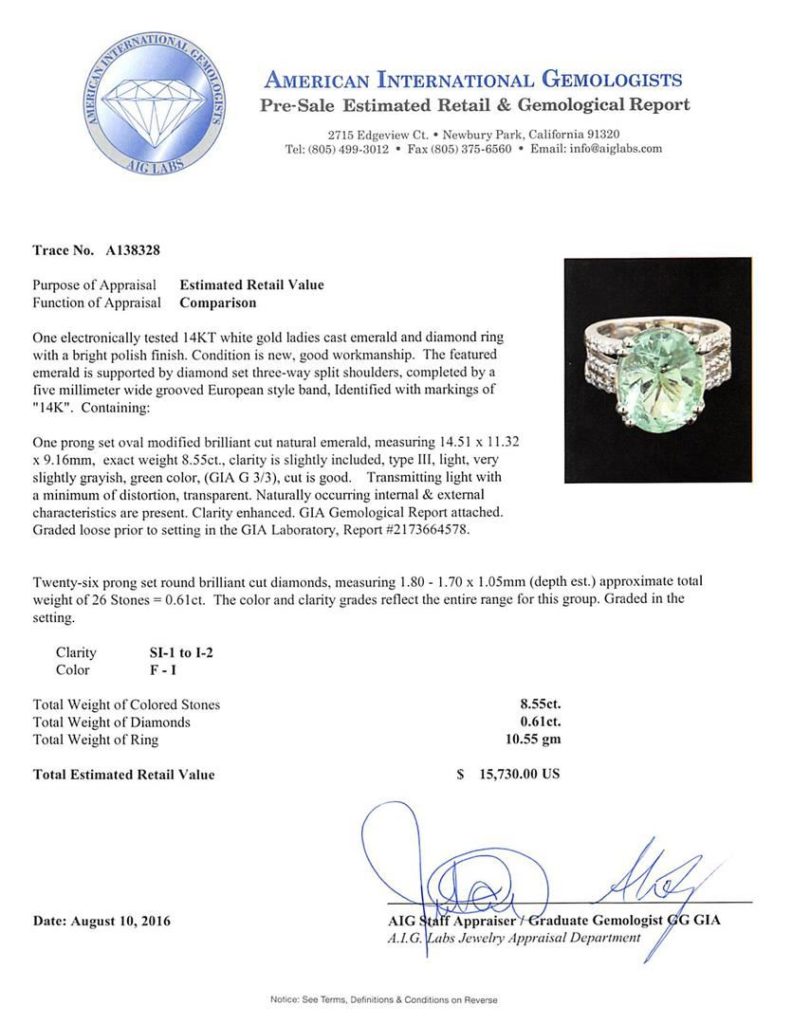 Then, just as promised, there is the GIA certificate (Figure 3). With one “minor” deviation, though. If you pay due attention, you shall notice that the certificates states – species: natural beryl; variety: green beryl. Bingo! It is not an emerald! It is a green beryl, instead. A much cheaper gemstone! 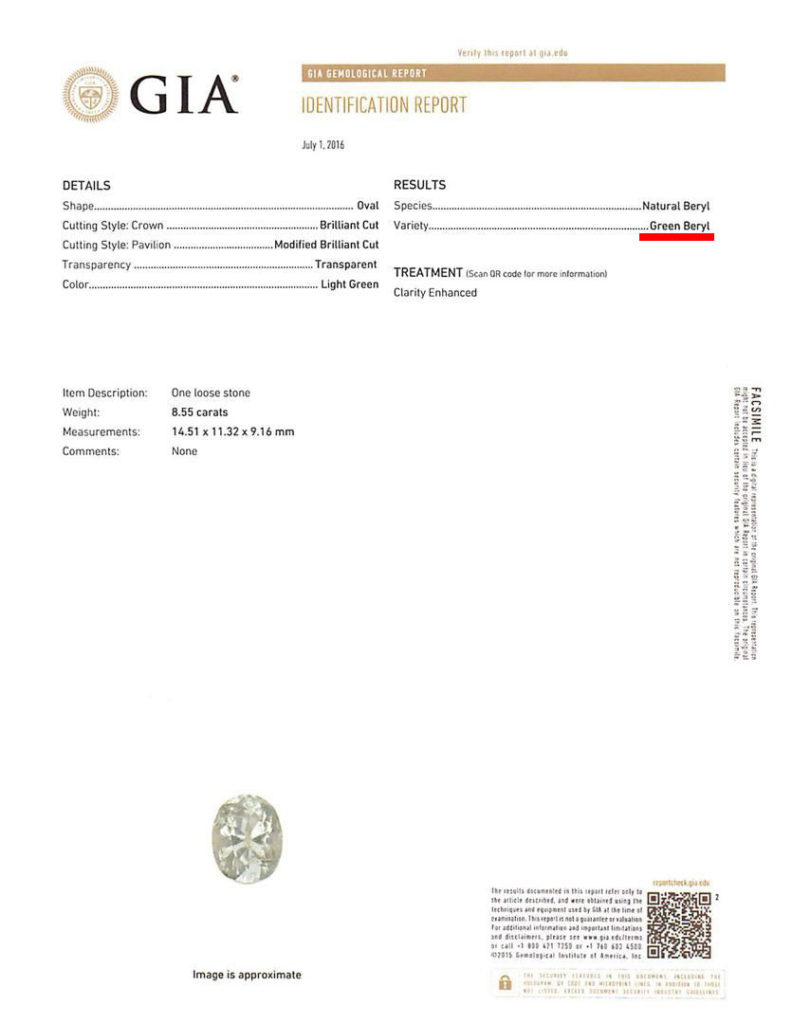 Normally, a GIA certificate would add trustworthiness and consequently – value to an item. Apparently, the seller here could not resist playing out the “GIA card” despite the fact that the GIA certificate clearly states that this is not an emerald. Most likely they expected a potential buyer not to notice this minor, yet extremely important, detail. It is also possible they were confident that a potential buyer will not possess the necessary knowledge to interpret this piece of information appropriately, even if it will not remain unnoticed.

No matter what caused the seller to act in this way, his behavior is highly unethical and misleading. It is not just about the fact that he is consciously trying to sell as an emerald something that is not an emerald. It is also about the item’s value. As mentioned before, green beryls are many times cheaper than emeralds. The estimates given both in the item’s description and in the AIG’s certificate do not hold true for green beryl. They are somewhat inflated even for emerald jewelry, not even speaking about green beryl jewelry. So, it is nothing more than a fraud. And it tells us something about AIG Labs and trustworthiness of their gemological reports, too.

Pay attention to how pale this green beryl is (Figure 4). 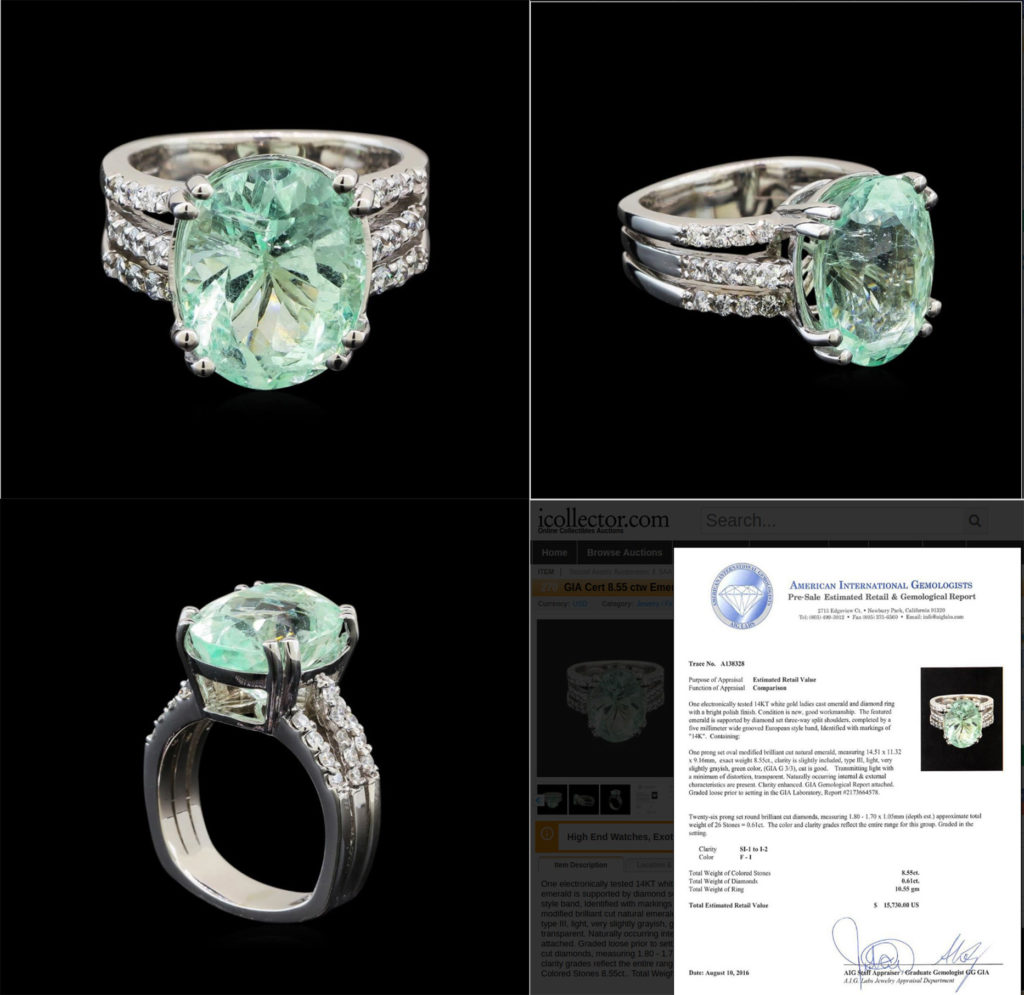 Here is another ring with green beryl that has been sold as emerald jewelry (Figure 5). The buyer has paid almost $3000 (winning bid plus buyer’s premium) for something that is obviously not worth that amount of money. 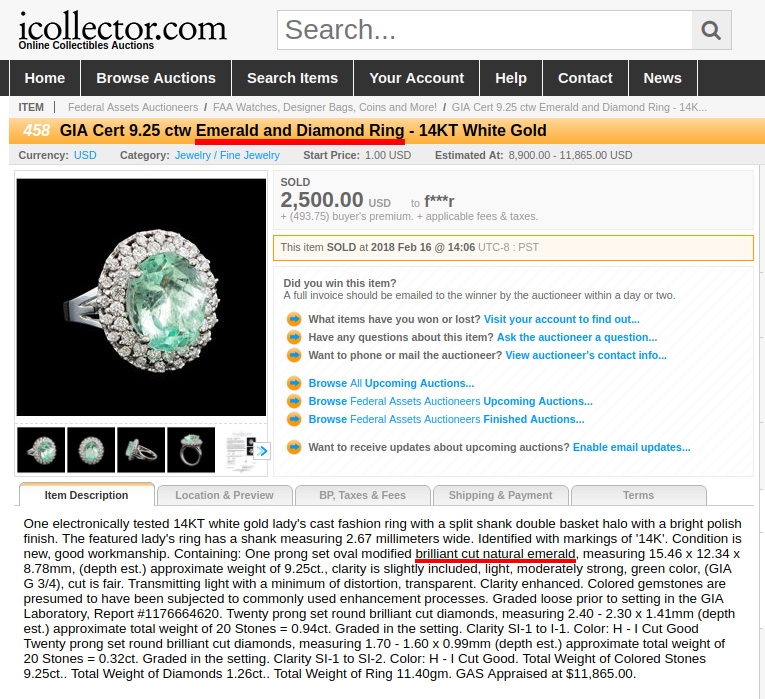 They have used a different gemological report this time – Gemological Appraisal Services (GAS). Its reliability is as poor as that of the AIG Labs. 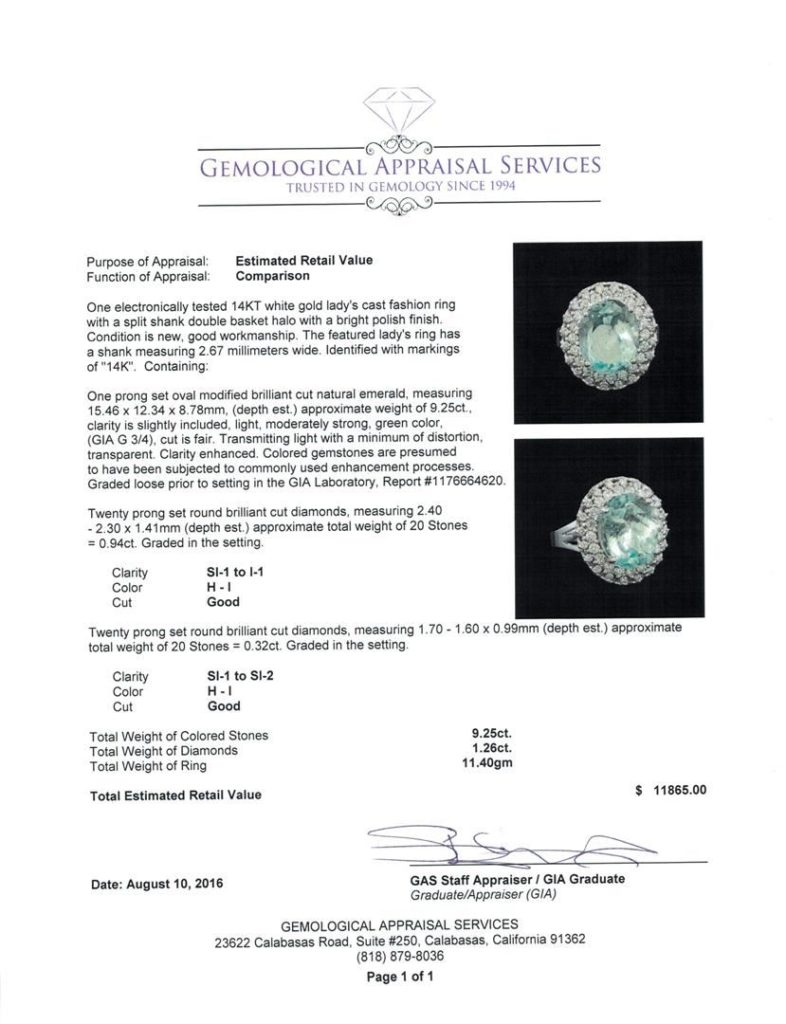 There is one very interesting detail about these gemological reports. These labs are well aware that the respective gemstones have been graded by the GIA before. Both labs specifically mention this in their reports: “Graded loose prior to setting in the GIA Laboratory, Report No #”. Yet, they manage to grade these gemstones like emeralds, which is totally contrary to the GIA’s grading. Their authority in gemology is literally zero when compared to the GIA. So, how can these dissenting gradings be explained? I see only one reasonable explanation – both AIG Labs and GAS are willing to adjust the reality, the truth as per clients’ needs. At the expense of a potential buyer, of course. 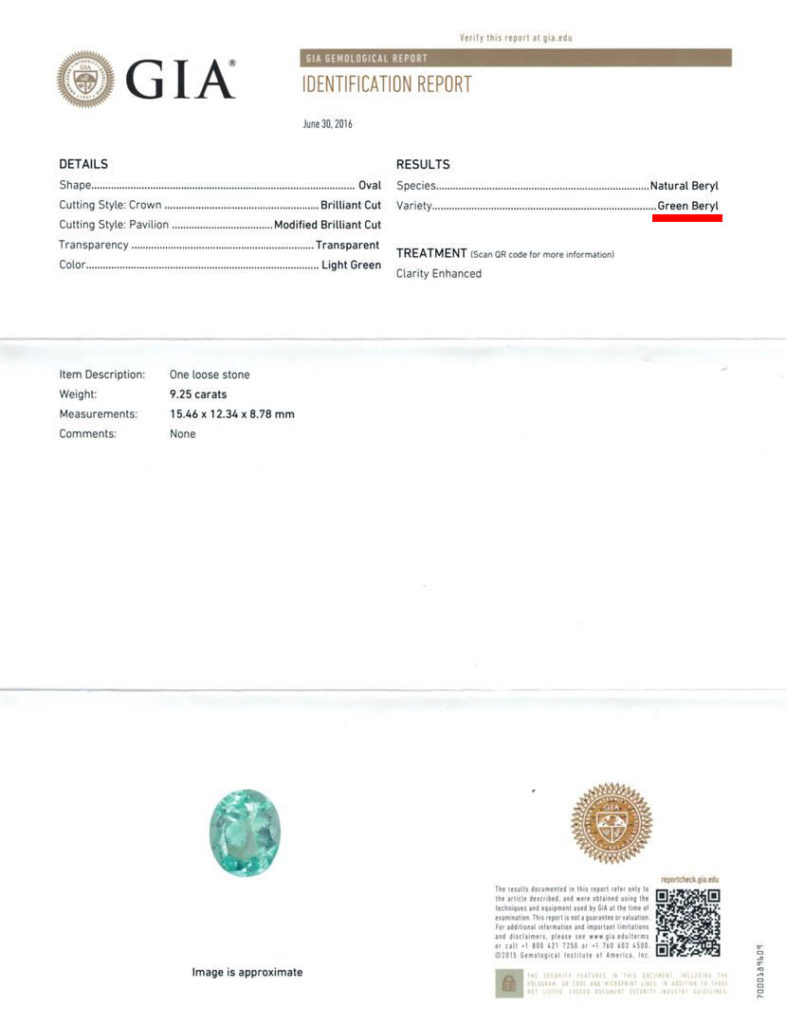 Again, pay attention to the pale color of this gemstone (Figure 8). As explained above, the main difference between green beryl and emerald lies in color. 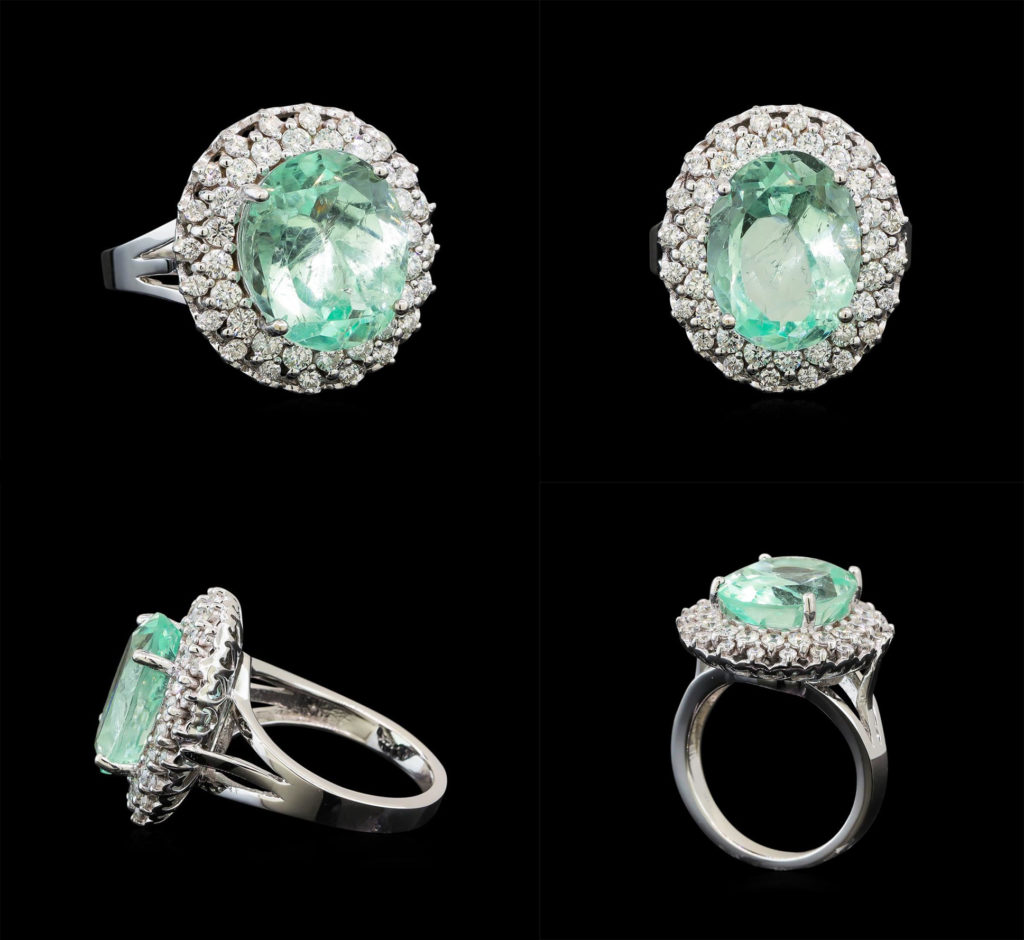 Figure 8: A Ring with green beryl

A different item, the same story. The buyer here has paid almost $5400 for a piece of “emerald jewelry” that has nothing to do with emeralds (Figure 9). The same inflated estimate again. Basically, a waste of money. 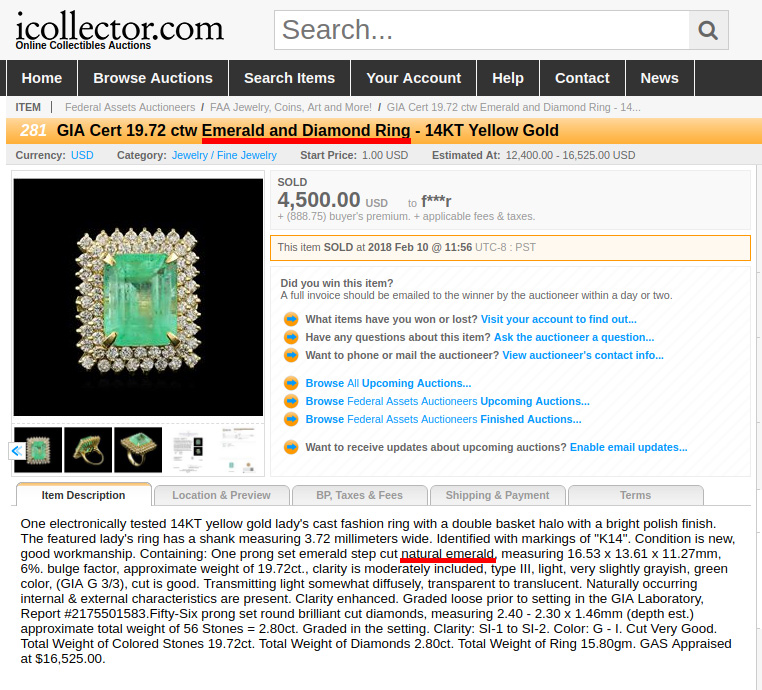 GIA clearly indicates that this is a green beryl. GAS stubbornly claims that it is an emerald. Apparently, GIA’s reputation, experience, and authority mean nothing to them (Figure 10). 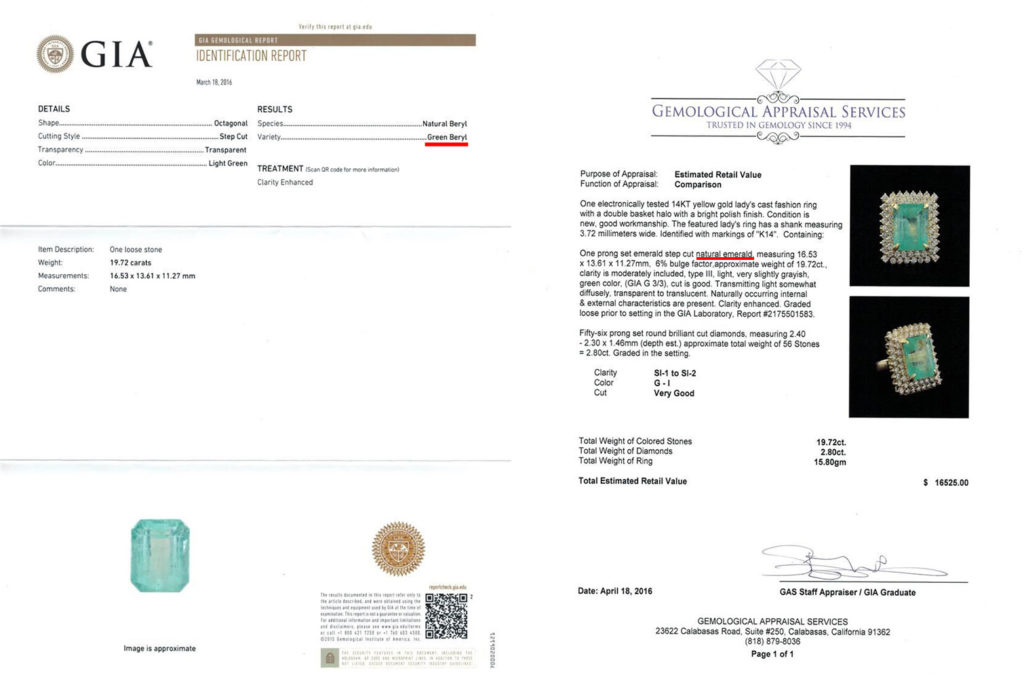 The green beryl in this ring might appear not as light in color as the previous ones (Figure 11). However, it has to be taken into account that it has been mounted in a yellow gold setting. Yellow gold always makes pale gemstones look richer, darker in color. So, when choosing your jewelry, take into account this aspect, too. 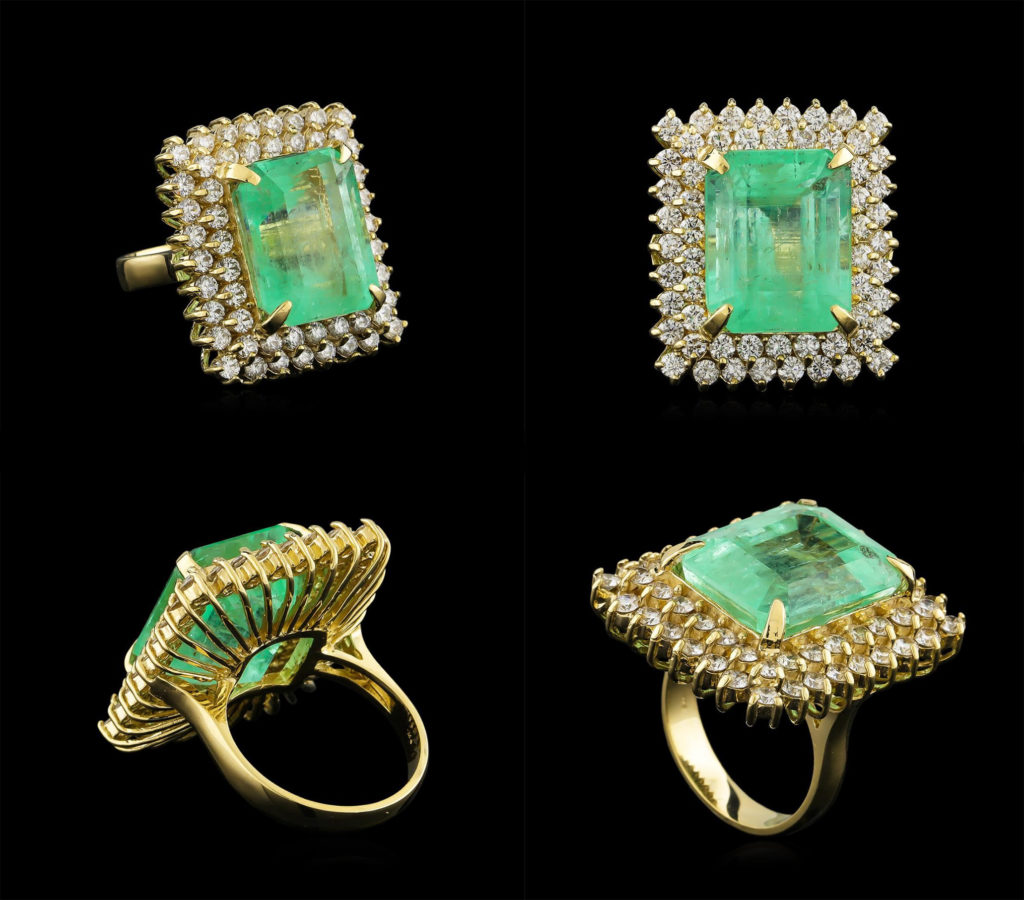 Figure 11: A Green beryl ring in a yellow gold setting

This ring looks pretty nice. No question about that. The problem, however, is that it is not worth the money it was sold for. In addition, the problem is that the buyer thinks he has bought a piece of emerald jewelry, whereas, in reality, he has bought something totally different.

So, exercise due caution when buying emeralds or emerald jewelry!

emeraldemerald jewelrygreen berylgreen beryl vs emerald
Previous article Cadmium in Jewelry: A Threat to Your Health
Next article Catawiki: Proudly Selling You Jewelry with Fake Emeralds 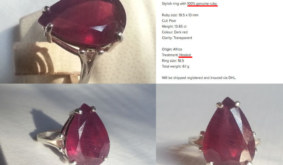 Easy Tips on How to Identify a Lead Glass-Filled Ruby 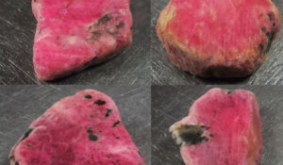 You must login or register to add a new comment.

Continue with FacebookContinue with Google
We use cookies to ensure that we give you the best experience on our website.OkFind out more